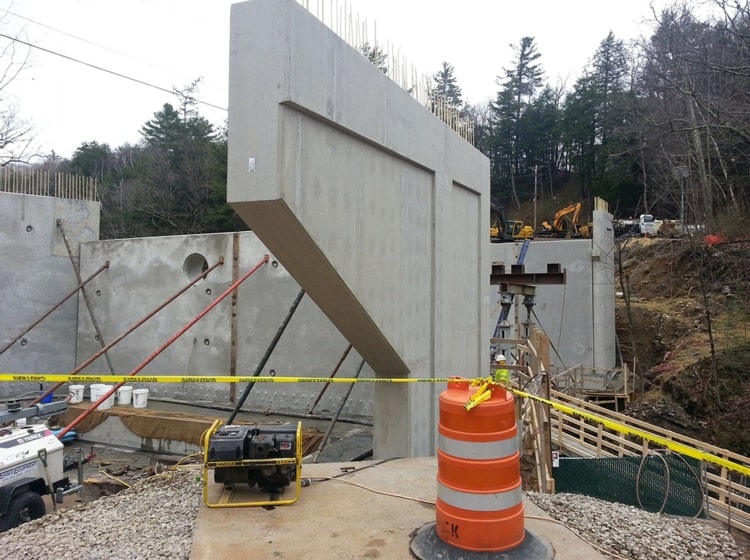 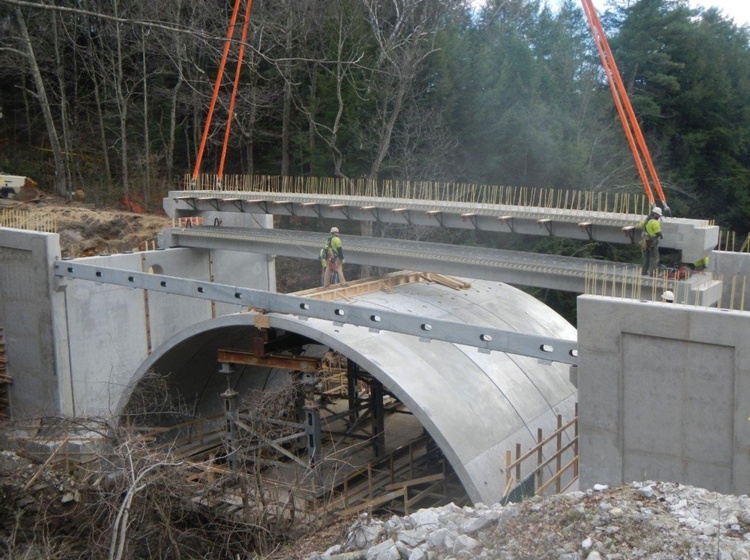 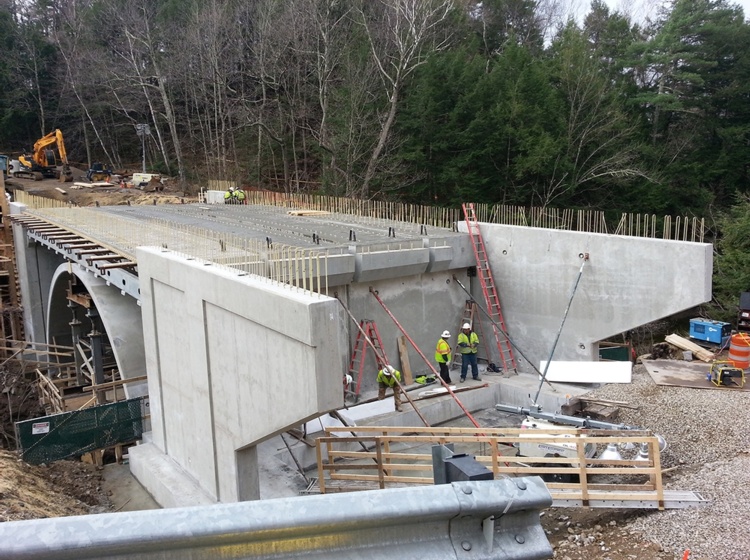 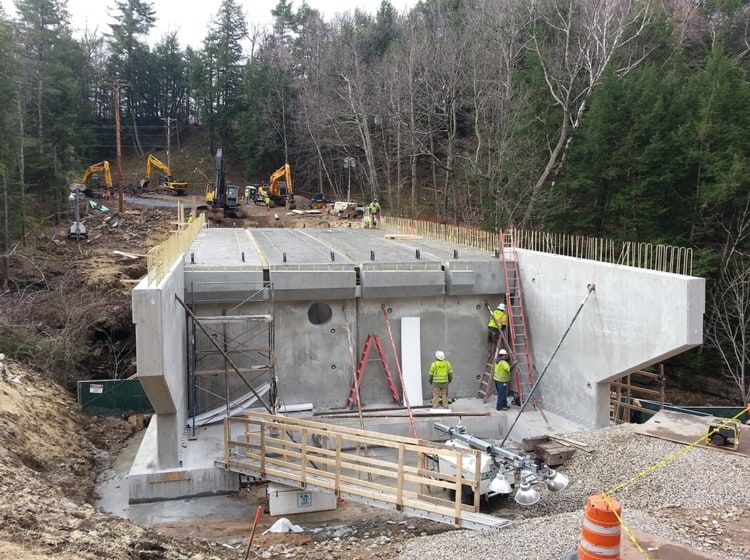 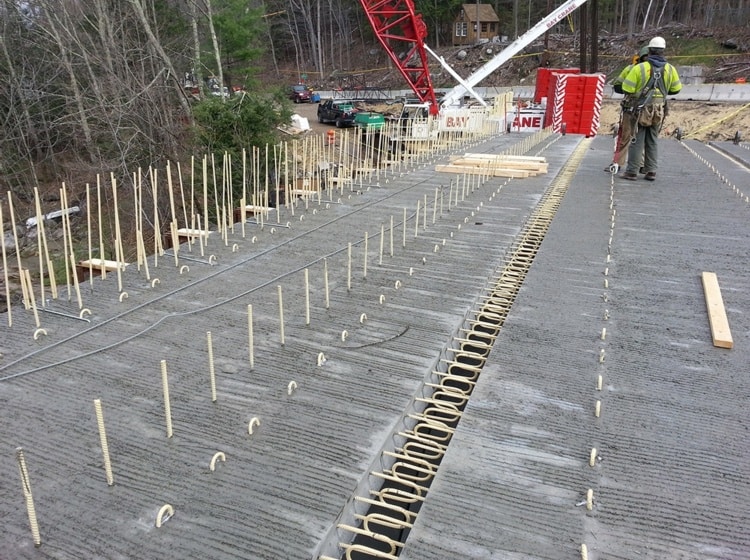 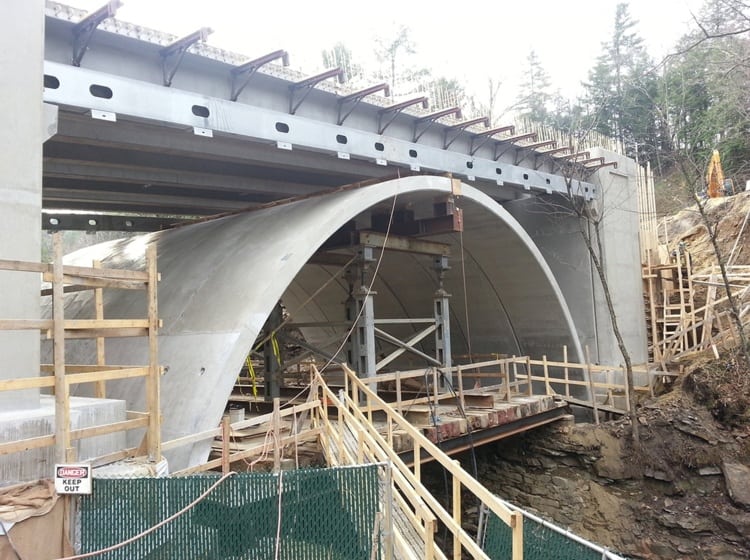 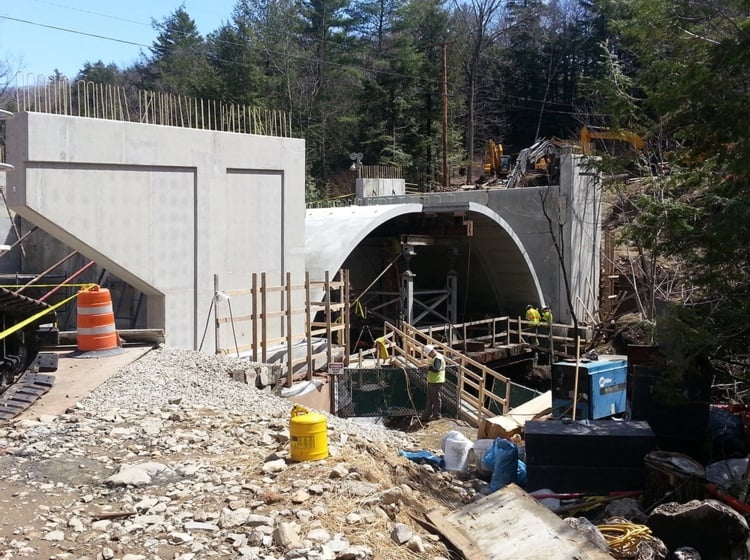 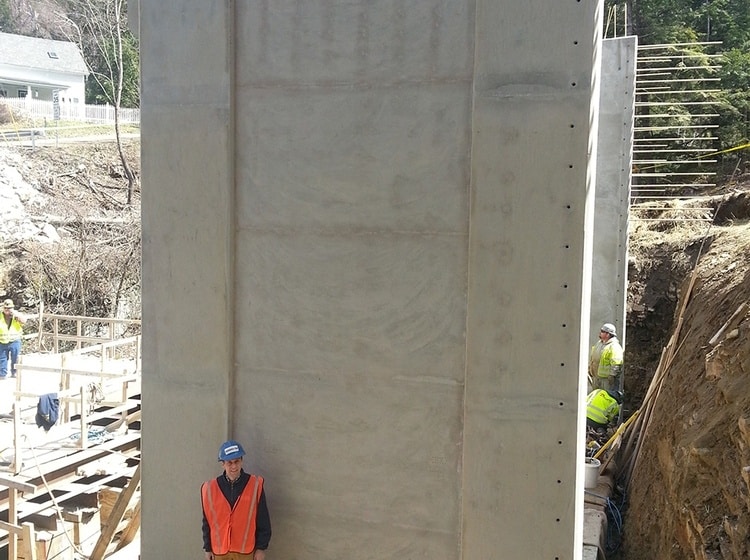 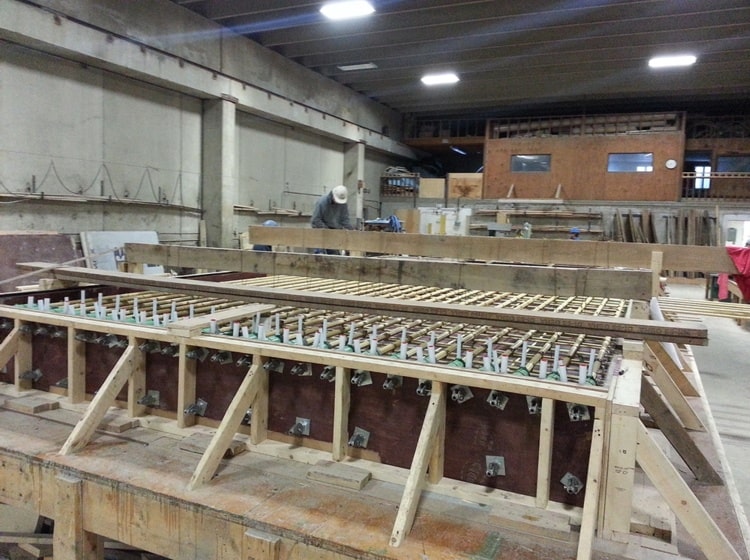 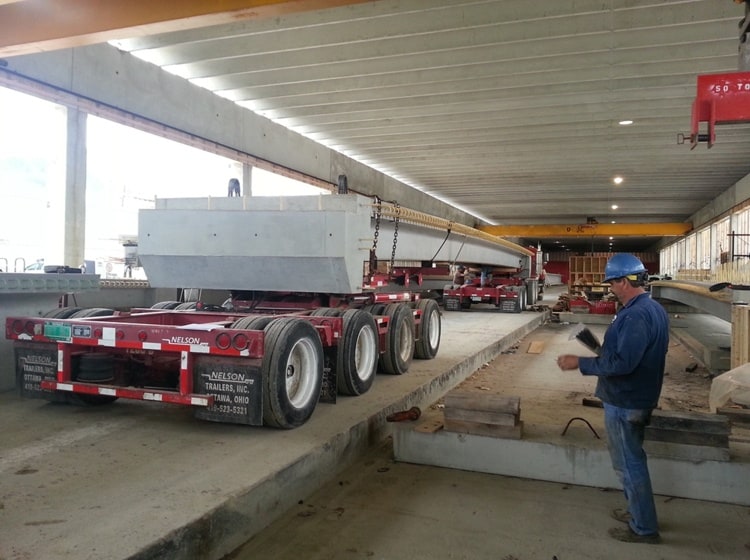 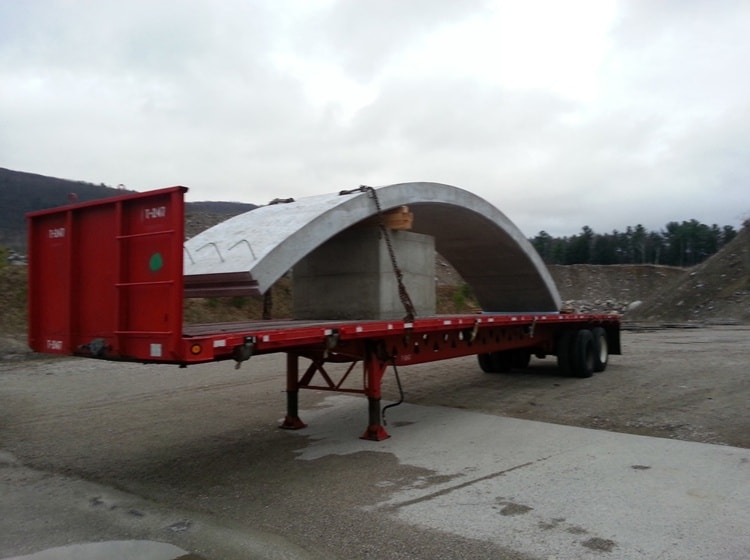 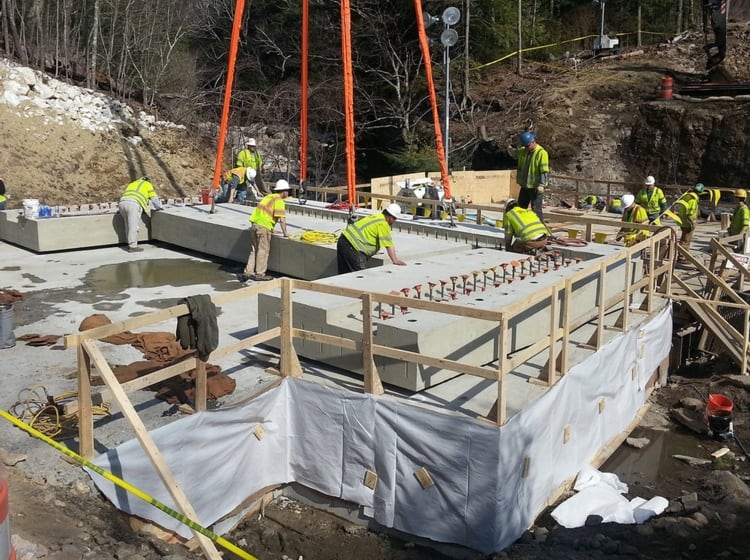 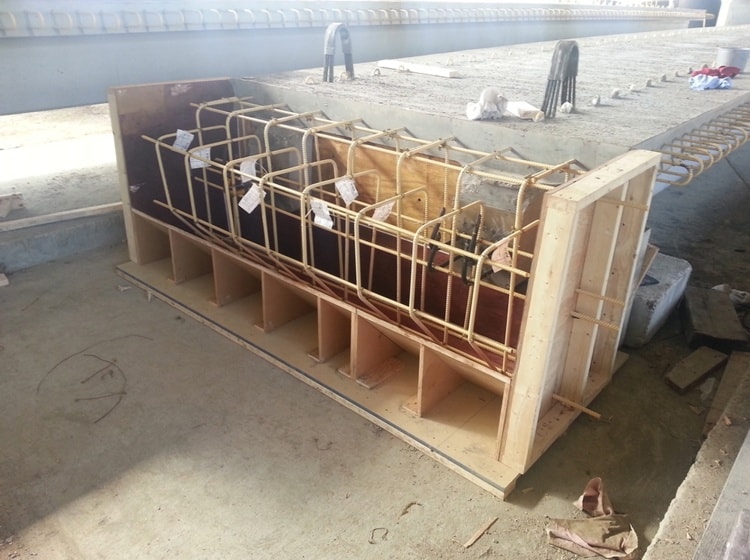 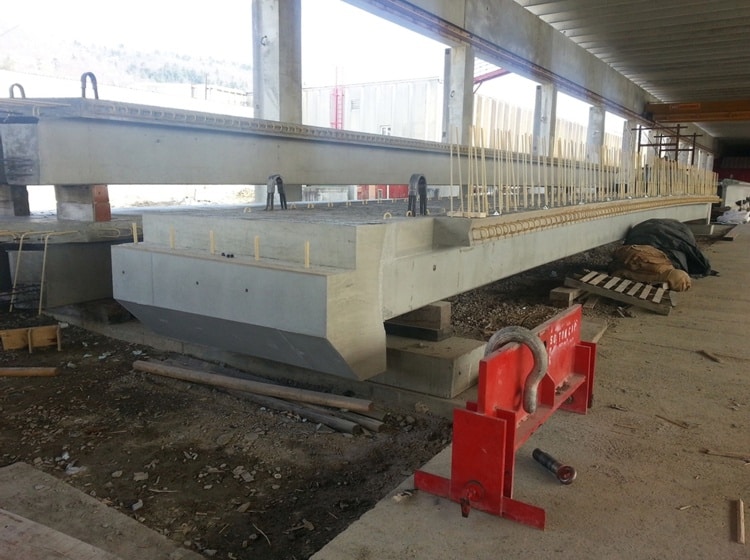 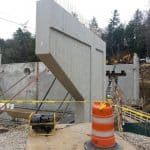 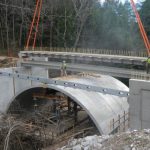 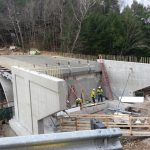 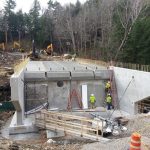 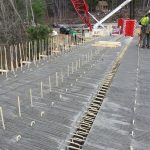 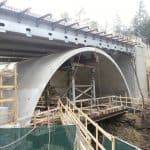 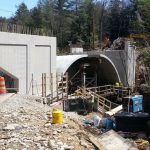 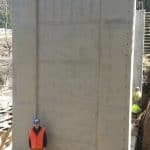 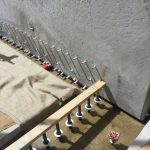 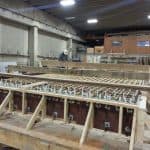 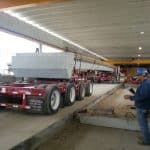 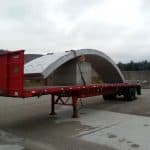 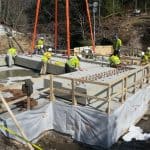 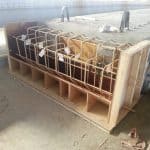 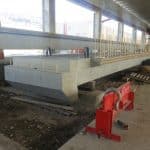 Designers of the new Sand Hill Bridge in Middlebury, Vermont, needed to create an arched design to replicate the look of the original 1924 design to meet the desires of local historical groups and town officials. But the new bridge’s configuration wouldn’t create the proper arch shape. To resolve this challenge, designers used a total-precast concrete design featuring NEXT (New England Extreme Tee) beams that span above a precast concrete arch that supports only its own dead load.

“We had a number of discussions and presentations with the citizens of Middlebury, who really wanted to retain the arched design,” says Greg Goodrich, assistant project manager at VHB Engineering. The challenge was more complex than it appeared. Because the gorge had become weathered and weakened over time, the bridge span was lengthened so it didn’t bear directly on the gorge edges, as the original bridge did. But the gorge wasn’t deep enough to create an arch with the right ratio to avoid appearing elliptical with the lengthened span.

“Because the bridge consists of almost all precast concrete elements, the design and layout of the structure was almost like a 3D puzzle,” explains Lauren Chervincky, project engineer. “As designers, we needed to fully understand how each piece of the puzzle was going to fit together to ensure that what we were putting on paper could actually be built.”

The designers paid particular attention to the anticipated camber of the NEXT beam and the fit-up of the precast arch panels adjacent to it. “We needed to allow for some variation of the NEXT beam’s camber while also providing a clean-looking fit up,” Chervincky says. “We also had to ensure the NEXT Beam superstructure was completely separate from the precast arch or precast panels so the non-structural arch portion of the bridge wouldn’t impose any forces on the structural NEXT Beam superstructure.”

“We looked at a lot of options, and the NEXT beams provided the ideal solution,” Goodrich says. “They’re a perfect size for this project, which is 62-1/2 feet to the center.” To further accelerate the construction schedule, the beams incorporated precast curtain walls (fabricated as secondary pours at the factory). Once they were set in place, they were backfilled and the approach slabs were set with no additional field pours besides standard joint-closure pours. NMB splice sleeves connect the abutment walls and wing walls to the footings to achieve a cantilevered design.

The use of all precast concrete components accelerated construction, which was critical. “Due to these being archaeologically sensitive areas, there was no space for a temporary bridge, and the roadway was too narrow to maintain traffic during construction,” Goodrich says. “And the detour was 30 miles, so the closure time had to be minimized.”

The schedule allowed only 45 days for closure, and the prefabricated components aided the contractor’s efforts to meet that tight timetable. The 31 pieces of footings, abutment walls, wing walls, arch segments and NEXT D beams were erected in only nine days. This opened up more time to finish other challenging aspects, including applying a cast-in-place, variable-thickness concrete topping, creating cast-in-place concrete sidewalks and parapet, and performing significant amounts of rock removal to allow for approach work.

“In theory, we could have paved directly on top of the NEXT D beams as the 8 inch flange doubles as a full depth deck,” Chervincky says. “As we saw how much pavement was needed to accommodate the reverse curve and anticipated beam camber, we decided to use a cast-in-place concrete overlay to create the desired superelevation. Then paving on top was just a straight shot across the bridge.”

As is standard for most projects by the Vermont Department of Transportation, the bridge features Level II dual-coated (Z-Bar) mild reinforcement in the wing walls, NEXT beams, cast-in-place sidewalk and concrete parapet, and arch fascia panels. It consists of a thermally applied zinc coating with an epoxy coating over that. All other components have Level I black rebar.

VHB detailed construction joints in the precast wingwalls to allow them to be shipped in multiple pieces to the bridge site, but the fabricator was able to ship them in one piece due to the close proximity of the precaster’s plant. “This obviously made for fewer pieces to pick and a nicer aesthetic,” Chervincky says.

The contractor created a detailed erection plan and used a 3-D model to fully understand the geometry and potential hang ups as each step of the construction progressed. The staging area was fairly small so precast component deliveries had to be sequenced for delivery.

“Everything went well,” says Goodrich. “Having the precaster fabricate all of the components made the project move quickly and smoothly.”