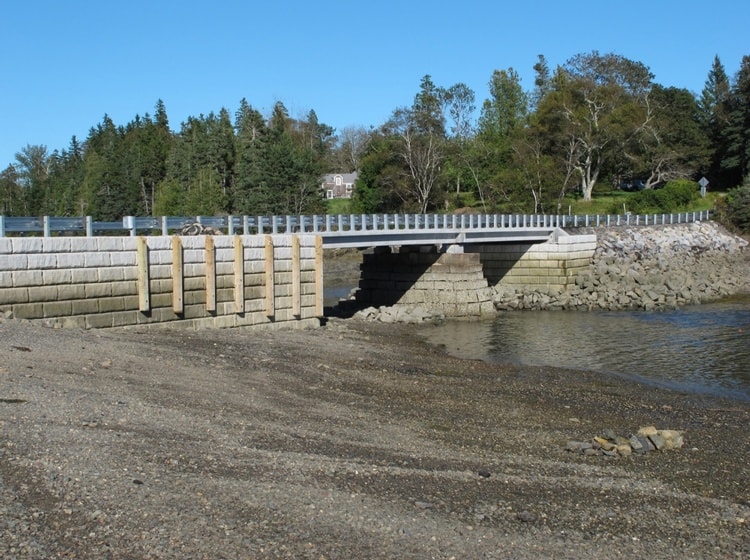 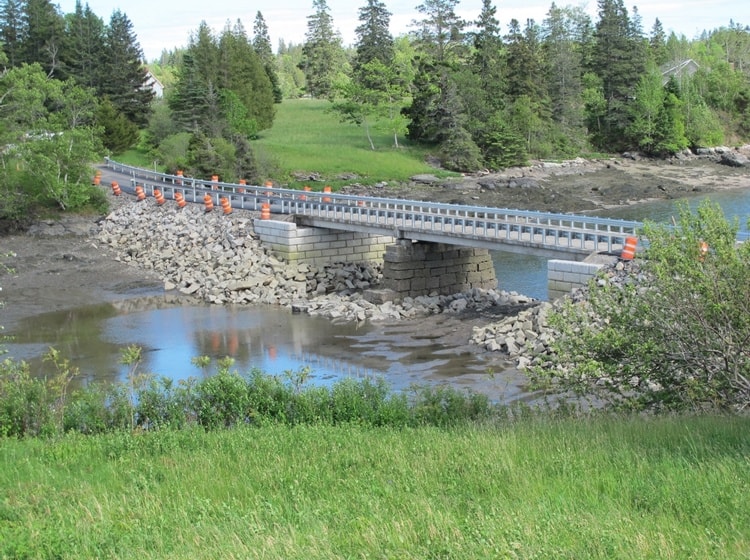 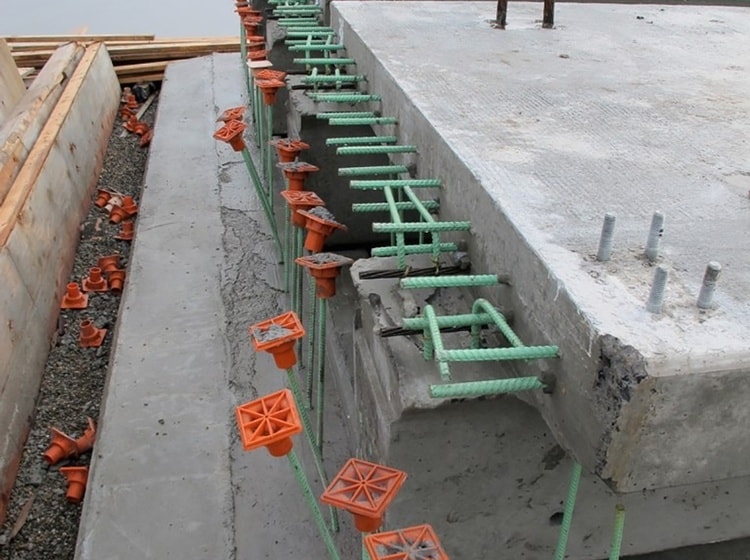 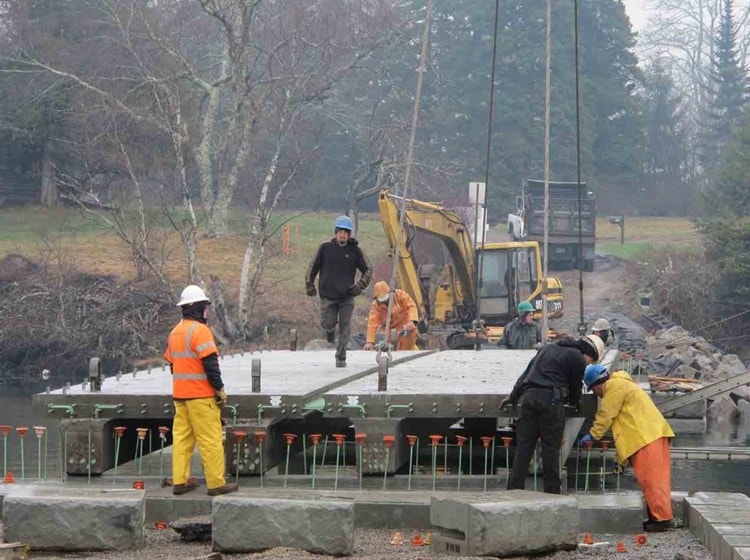 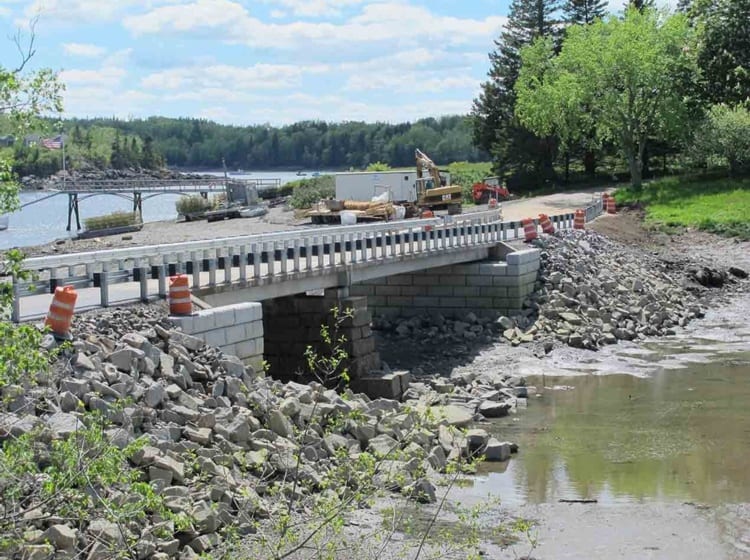 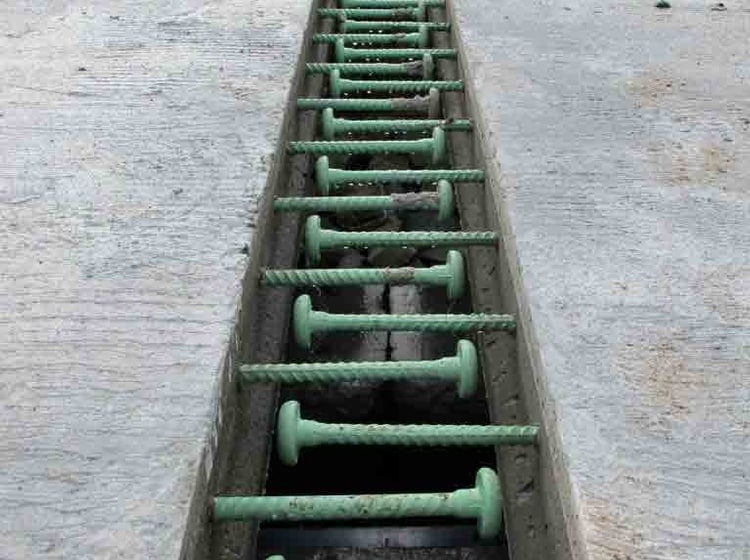 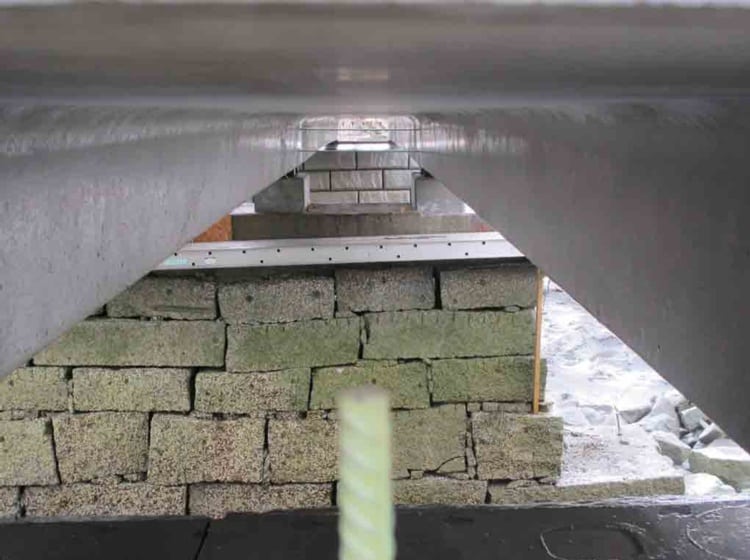 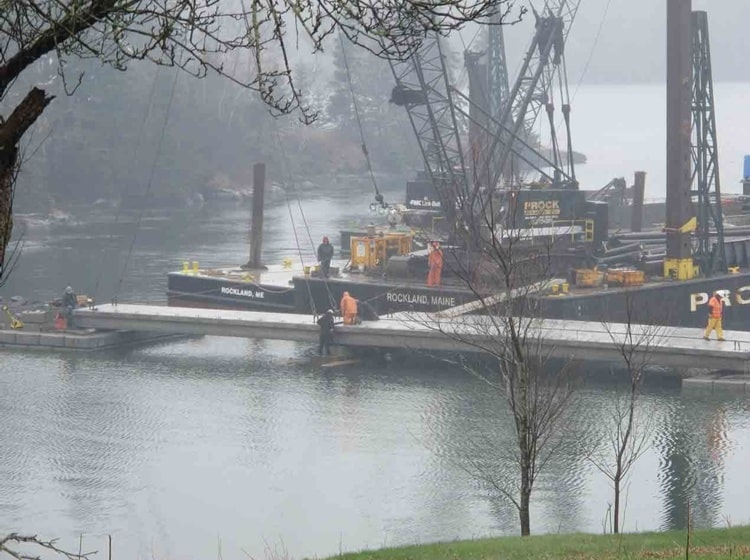 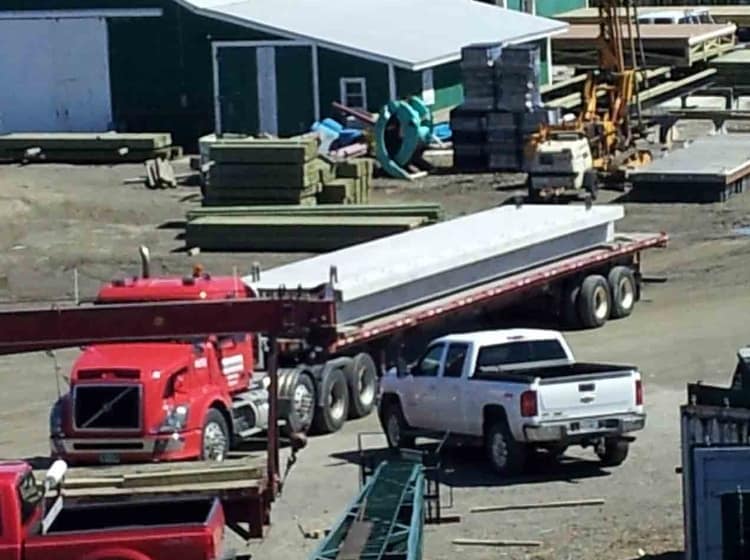 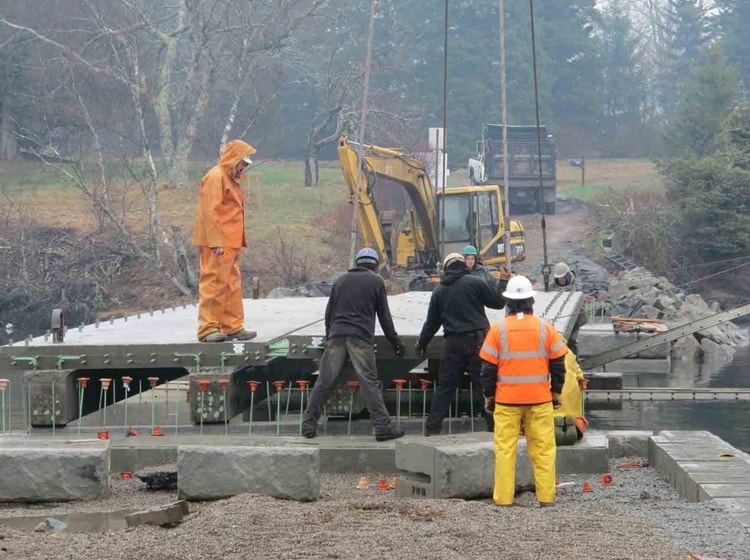 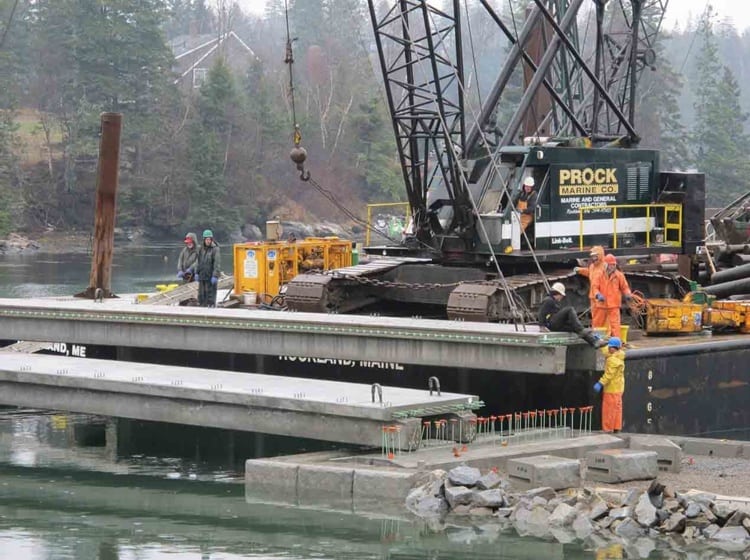 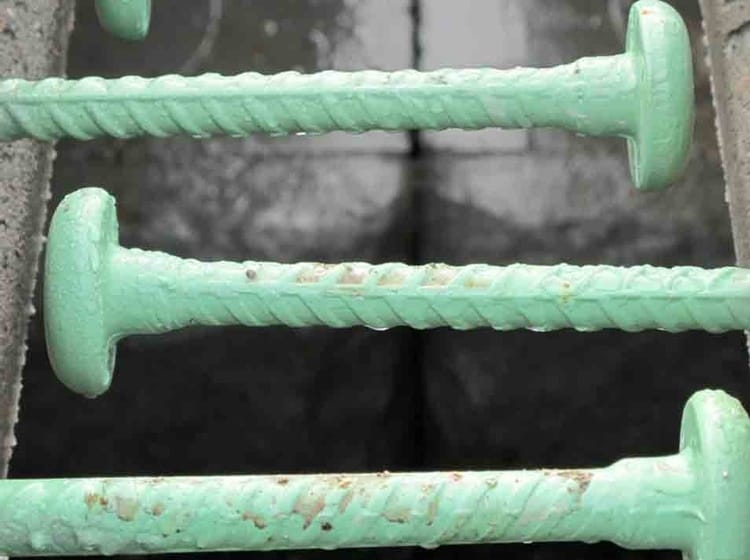 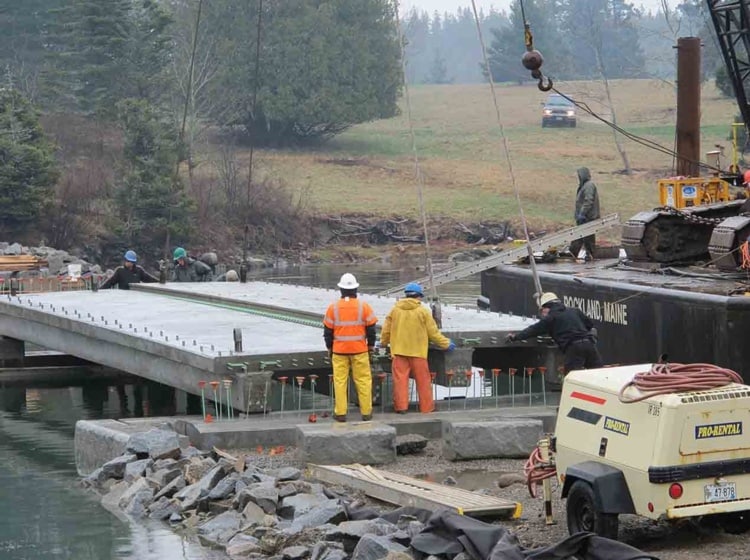 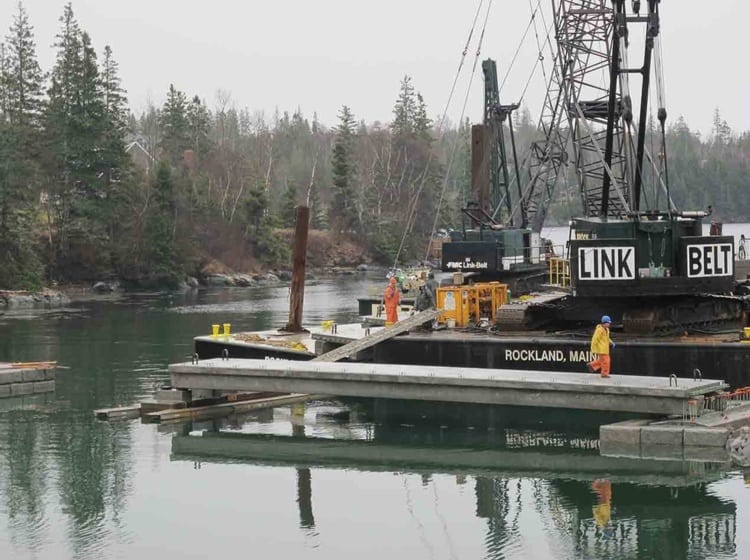 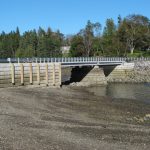 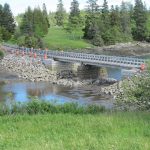 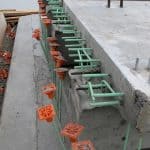 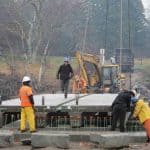 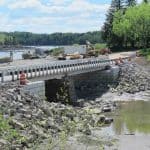 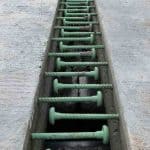 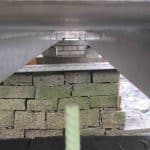 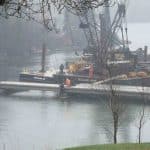 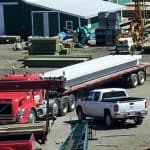 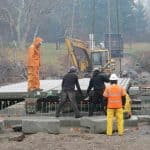 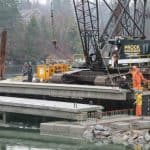 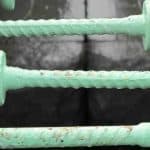 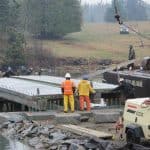 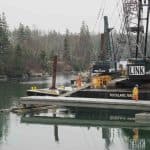 Lightweight NEXT Beams Create Island Bridge
Residents of North Haven, Maine, had their voices heard when they expressed concern about the severe deterioration of the steel bridge that served as a major access and gathering point for the island’s activities. The resulting new Beach Bridge features the first use of lightweight New England Extreme Tees (NEXT) that offered an economical design that was quick to erect.

After the Maine Department of Transportation lowered load weight limits in both 2007 and 2008, it became apparent that the bridge had to be replaced. “The steel beams had outlived their useful life,” says Steve Durrell, project manager at Prock Marine, the local firm that served as general contractor. “The beams looked like Swiss cheese.”

Lightweight NEXT Beams Offer Best Solution
Design firm T.Y. Lin and town selectmen agreed that the NEXT beams offered the best solution. The bridge serves as an access road for a number of residences as well as being used as a wharf by local fishermen to load and unload catches during fishing season. It also offers a popular swimming site in summer.

“We chose the lightweight NEXT beams for several reasons,” says Josh Olund, bridge engineer at T.Y. Lin. “Being on an island, the bridge would have been financially prohibitive to build by barging over cast-in-place concrete. And the NEXT beams provided both prefabrication and a deck to reduce materials and time.”

The bridge consists of two-girder lines of two spans, one 56.5 feet long and the other 39.5 feet. The difference in length allowed the spans to reuse the existing granite pier in the water, Durrell explains. “The pier was in excellent shape, and reusing it to save time and money was a no-brainer.” The deteriorated abutments were replaced with geosynthetic reinforced soil (GRS) walls, thought to be the first such use of them in a tidal environment, Olund says.

The 6,000-psi design strength NEXT beams were cast with a lightweight mix to reduce the girders’ weight so the original pier could be reused and to avoid problems with underlying soil conditions, Olund say. The mix includes fly ash and calcium nitrite to achieve the desired strength and durability properties. Lightweight coarse aggregate, consisting of ¾-inch #4 Norlite expand shale, was also used to yield a maximum plastic unit weight of 120 pounds per cubic foot. Additional strands in the shorter beams were de-bonded so all four units could be cast in a single continuous placement.

The beams were trucked to the contractor’s Rockland, Maine, barge terminal and then barged to the island, along with all other materials. “All materials have to be barged in from 12 miles away, so the more fabrication that could be done offsite, the better it was,” Durrell notes.

The girders were set with a crane on a barge, and they were connected using a “zipper joint” where they interfaced. The joint consists of doorknob-headed rebar stud that extends out from the girder ends and alternated longitudinally to overlap, stopping a few inches short of touching the other panel with the “knob” end. Additional longitudinal rebar was placed over these pieces and a cast-in-place concrete closure was poured. The design ensured the joint can’t pull apart and reduced the amount of joint materials that needed to be delivered.

The $2-million cost was split between the state and the town, with the town using a rural-development loan from the USDA to fund its share. Construction began in January 2013, during a harsh winter, and reopened on Memorial Day—in time for the summer fishing season. Erection of the four NEXT beams took less than half a day.

“This was the first time we’d used the NEXT beams, and they worked very well,” Durrell says. “They provided an easy way to create the bridge on this island, where material truckability is difficult.”