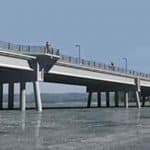 Aesthetics were a key goal for the Maine Department of Transportation when it developed plans to replace the Martin’s Point Bridge connecting Falmouth and Portland along U.S. Route 1. The goals, according to the department, were to have “the new bridge design address the multimodal needs of the region while visually complementing the bridge’s environmental setting.” To achieve those goals, the design-build team specified New England Bulb Tee (NEBT) girders and a concrete deck using stay-in-place precast concrete forms.

In developing their RFP, MaineDOT worked with a local Advisory Committee in a Context Sensitive Solutions process, according to a spokesperson. The design-build team of CPM Constructors and VHB—Vanasse Hangen Brustlin won the bid with a $23.5 million proposal.

Their proposal “embodies a balanced design that unifies cost-effective concrete bridge construction with simple, smooth, and consistent forms, permitting the bridge to blend into its natural environment and surroundings,” the spokesperson said.

The new bridge, consisting of five lines of 6-foot-deep NEBT precast concrete beams, will consist of 10 spans over nine piers for a total length of 1,285 feet. The structure replaces a deteriorated 1943 design that had been updated several times over the years and consisted of 46 spans over 1400 feet. The nine new piers will be supported by six concrete-filled steel piles.

The use of the NEBT girders allows for longer girders that will eliminate a number of piers and save material and labor costs as well as construction significant time.

The bridge is being constructed parallel to the existing structure and downstream (to the east), with the same hydraulic opening of 65-foot clearance and 13 feet at mean high tide. It is 34 feet wide, with one 12-foot lane and 5-foot shoulder in each direction.

“The design-build team’s intensive focus on eliminating clutter results in a light, clean, and open look throughout the structure,” said the department spokesperson. “The shadow created by the deck overhang, as well as the natural contour of the beams, will reduce the perceived structure depth and convey a trim, tactile quality to the bridge as it reached up and over Casco Bay.”

All the precast components were manufactured by J.P. Carrara & Sons, Inc. of Middlebury, VT.