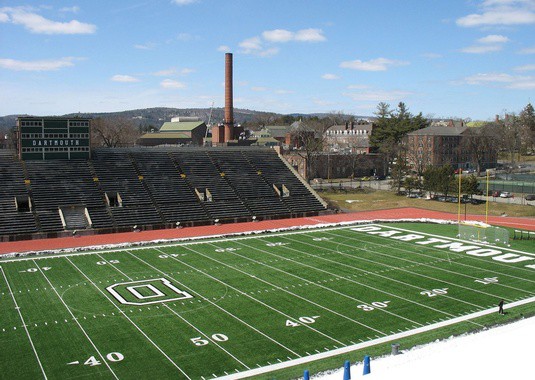 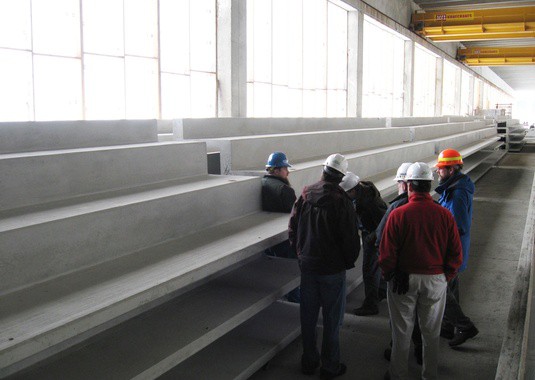 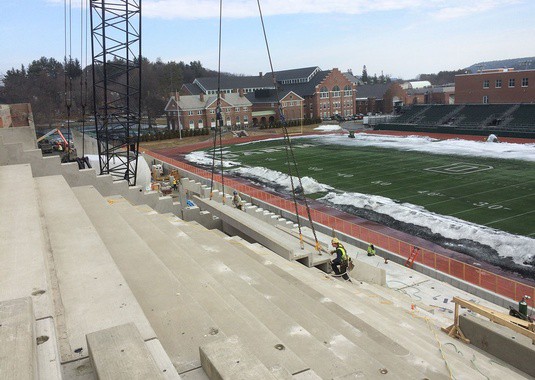 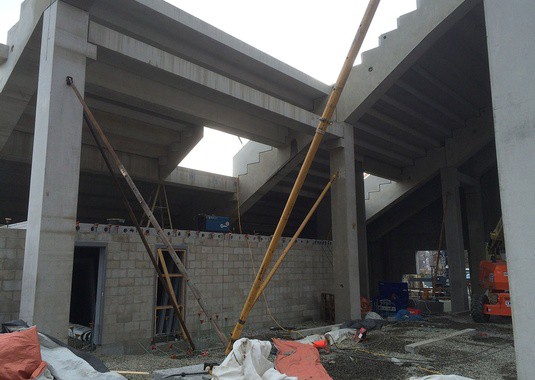 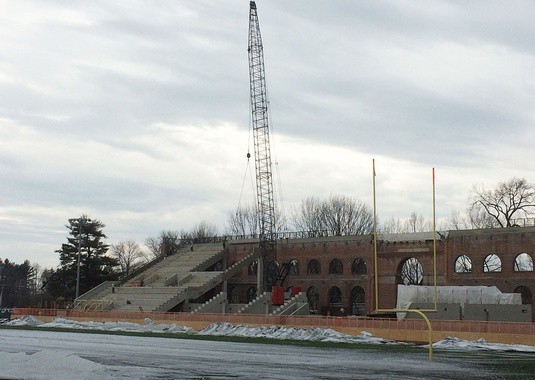 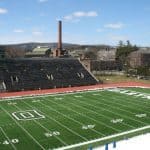 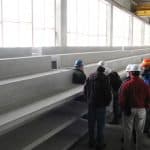 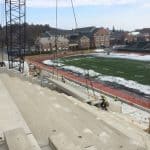 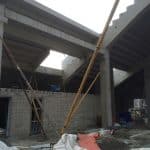 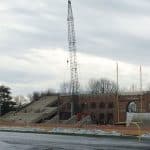 Officials at Dartmouth College in Hanover, New Hampshire, have been planning to replace the West Stands in its historic Memorial Field for many years and even had the precast concrete components cast seven years ago, before the Great Recession derailed construction plans. The project now is being completed and will be ready for the new football season in August 2015.

The project completes update work on the stadium, which began with reconstruction in 2006 of the East Stands (on the visitors’ side), which was followed by the addition of an artificial-turf playing field, upgraded lights, video scoreboard, and the nearby Varsity House athletic facility in the ensuring years. The work requires working around the existing historic brick façade and erecting the pieces from one end due to restricted site access.

The new West Stands (on the home side) will feature wider aisles and concourses, handrails, modern rest rooms, a premium chairback section on the 50-yard-line, and accessible seating on three levels. Those levels and the new press box will be accessible by elevator.

Engelberth Construction, the construction manager on the project, recommended precast concrete for the project to match the original seating, which was built in 1923 using steel framing and cast-in-place concrete, explains Dick Terk, vice president of project management at the company and the project manager for the job. It also was chosen for its longevity and high-quality appearance, he notes.

Carrara served on a design-assist basis on the project. “Their proposal for the project provided the best understanding of the challenges we faced and offered the best approach for meeting them,” says Terk. Adds Joe Carrara, President at J.P. Carrara, “The precast structure is highly complicated, using many custom beam, wall, raker and stadia bleacher sections. It required closer coordination among the design team than most projects to lay out and configure the precast framing.”

The key challenge arose in working around the existing 42-foot-tall brick façade, built in 1893, which features large arches that lead into the stadium. Crews cut the wall loose from the concrete seating that was serving as support and rebraced it while the steel and cast-in-place concrete was demolished and removed. Large openings were cut into the north wall of the stadium to provide access for construction. Foundations were installed south to north, working their way out toward the new openings, and fill was placed over them.

The 250-ton crane used for the erection took the same course, starting the erection at the south end and working its way back north. The crane had to be upgraded from a 150-ton unit because several of the pieces were too large to be handled with the smaller crane, and it had to be tall enough to clear restroom facilities built along the side. The crane pad was elevated to ensure clearance would not be a problem.

The precast components have been waiting for this moment for seven years, as trustees approved the project in 2008 but then postponed it as the recession hit. The pieces were cast over the next nine months and stored at an abandoned airfield in Windsor, Vermont, in a newly designed and constructed staging yard. Then they were delivered to the site as needed during the erection process. The erection will be finished in June, with a few final hollowcore slabs installed around the pressroom, a steel structure, in July 2015.